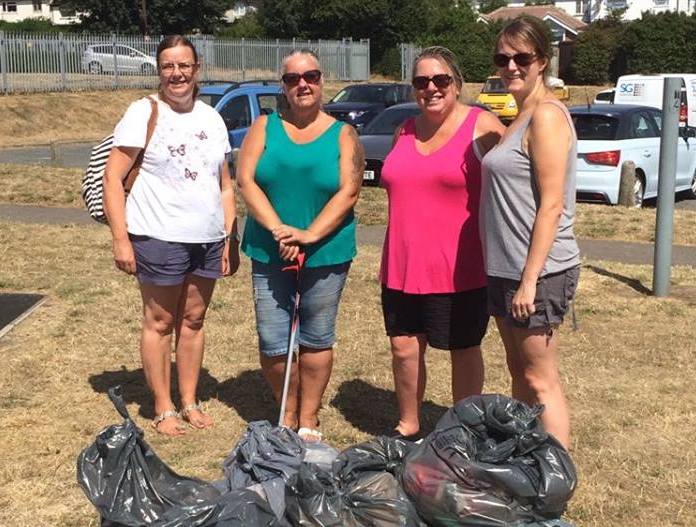 Friends of Aveley Rec are led by a passionate local activist, called Teresa Webster. She has lived and been involved with the community in Aveley for 25 years. She comes from a voluntary background having been Secretary of a support group for Childless couples.

Rob from Friends of Hardie Park, met her at Aveley’s local forum meeting when he was looking to connect with someone about the possibility of creating a Friends of group, especially as the local Council had plans and funding to build a Community Hub within the park itself.

Teresa teamed up with two other local residents, recently married couple David and Debbie and began planning litter picks in the park. By August 2018 the group had completed 6 litter picks and then they advertised a get together of people who might be interested in joining “Friends of Aveley Rec” in the local pub. 15/20 people turned up and it was agreed that they would like to pursue the challenge of running the café in the newly built hub and to engage the community to improve the park.

The hub building works commenced in September 2018 but this very much restricted the group’s efforts as access was (and still is) severely limited and the building site is a substantial size. The park very much felt “out of action”. Also, the group did not feel included at all with the Council’s plans for the hub itself. Communication was a real issue.

In October, the group approached Aveley Primary School to ask the students to design a logo, the best three entries were combined to form the logo.

Rob reconnected with the Teresa & Debbie in November and helped renew their energy for the project and following up on the residents who were interested in forming the Friends of group. A meeting was held on Feb 28th 2019 and a Community Interest Company was formed, now known as “Friends of Aveley & Kennington Parks” incorporating several parks in the area.

Since then, a lot more litter picks have been advertised and held with good press and social media coverage, in several of the parks and negotiation with Council has meant that Rob and Teresa have now been invited onto the hub steering committee and asked to submit a proposal on how the café would be run.